The Sisters Grimm #7: The Everafter War by Michael Buckley 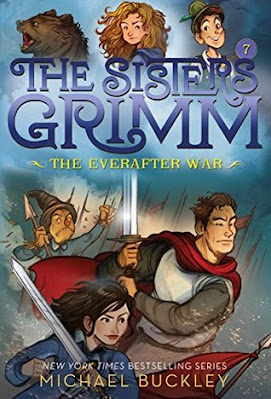 My name is Puck, and I'm getting sick and tired of saving the Grimms from certain death. It's going to ruin my reputation as the Trickster King. The most fun I get is annoying Sabrina, but I think she's given me the puberty virus. How can I be getting older if I've been a boy for thousands of years? Most of the Everafters and the Red Hand have declared war on the Grimms, and we've been forced to leave Granny's house. I'm sure I'll be asked to come to the rescue again, and some of the weapons look pretty cool. That giant catapault and the water cannon are going to be so much fun to use. I wonder if there's some way I can use them to get revenge on Sabrina. However, the spy among us is complicating matters.
The opening pages offer foreshadowing of the Master's identity, leader of the Red Hand. This creates anticipation and suspense, as readers slowly approach this moment in the story. The biggest difference in this book is the awakening of Sabrina and Daphne's parents. The father's presence creates unexpected problems and complicates the girls' past efforts and future plans. It also provides the opportunity for new twists that will carry over to the next book. The variety of fairy tale/folktale characters will make the cast identifiable and help readers make connections. Seeing Snow White as the martial arts instructor is amusing, but she has issues to resolve. An important character is lost, and a new one will be added late in the book. The threat of the Red Hand has been growing throughout the series, and it comes to a head in this book. The Master's identity is revealed and will be a surprise, and the endgame motivating the Red Hand will become known. It feels like this book takes the story to a different level, as the past ones have been leading up to this moment. It will be a lot of reading, but I really suggest you start this series from the beginning. Based on the lack of availability at my local library, I'd say this series is pretty popular.
Posted by Mark Buxton at 12:33 PM