The Lorien Legaices #1: I Am Number Four by Pittacus Lore 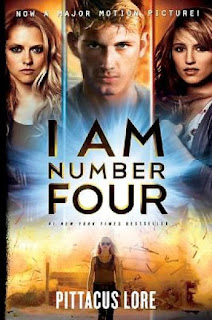 I first heard of this title as a movie, but I gave the book a rating of five out of five. "John Smith" and eight other gardes escape from their planet, Lorein, and go into hiding on Earth. Their planet has been invaded by Mogadorians who intend to kill all of the inhabitants and take all of the planet's resources. Earth is the Mogadorians next target. The gardes will develop legacies, or special powers, while on Earth which will hopefully make them strong enough to defeat the enemy. Due to some special protection, the Mogadorians are only able to kill the gardes in numerical order as long as the gardes are separate from each other. John and his guardian move to Paradise, Ohio, to go into hiding and wait for John's legacies to develop. Of course, John makes friends with a diverse group of humans, but he must try to hide his secret identity and powers from them. His presence endangers the humans, but John has never had close friends before. What will he do when the Mogadorians discover his location?

The plot jumped into the action immediately as the third garde was killed in the opening pages. I enjoyed John's character as he tried to balance his need to survive with his need for friendship and love. The plot held my interest very well, and I ended up reading the book in one day. While training with his guardian, John often had flashbacks to his early life on Lorein which might confuse readers who aren't paying attention. John also had a budding romance with Sarah, so readers may be turned off if they're not willing to accept frequent hugging and kissing. Overall, I really enjoyed the book, and I'm hoping to get my hands on the sequel, The Power of Six.
Posted by Mark Buxton at 8:47 AM 0 comments 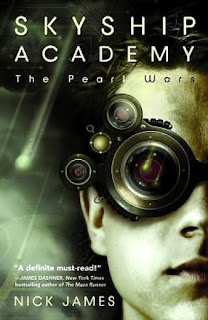 This book is the first in a new series (2011), and I gave it a rating of five out of five. In the year 2095, Earth's environments and governments have changed after a horrific, devastating world war. Jesse Fisher lives above the planet with his friends in the Skyship Academy, other people live near big cities on the Surface, and everyone else lives in wasteland outside the cities. People living above the Earth are not allowed to come down to its surface, and the large cities are run like fortresses. The key energy source during this time period is pearls, balls of energy that fall from space, and Earth's inhabitants fight over them. Jesse nearly dies during a mission to retrieve pearls when he falls from a twelve-story building. Cassius, the boy who made Jesse fall, is unaware that Earth's future depends on these two boys. Jesse seems to be the least likely person to hold the key to survival in his hands. Literally.

The action opened quickly on page one with Jesse dangling from a rooftop. The plot and conflict seemed to be pretty clear as the different characters fought over pearls and planned secret missions. However, little hints started popping up that there was more going on than first thought. Jesse and Cassius had undiscovered powers that they weren't able to control, while the people around them had secrets and weren't always trustworthy. I was a little bothered at how the verb tenses changed in different chapters, and I'm not certain why it was done. That's the language arts teacher in me, but I'm looking forward to the sequel. It was a new, well-written science fiction novel.
Posted by Mark Buxton at 5:58 AM 0 comments