Martin the Warrior by Brian Jacques 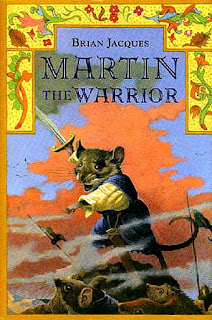 This book was the second I read in the Redwall series, and I gave it a rating of four out of five. In the first book, Redwall, Martin has been dead for quite a while, but he is spoken of as a hero of the castle and takes on an almost god-like status. Martin the Warrior explains his life. Martin loses his father's sword to an evil ruler. He escapes and vows to free all of the slaves and get his sword back. The plot follows the escapees as they try to find reinforcements to help rescue the other captives. Martin's group is captured and attacked by other forces along the way. In the meantime, the evil ruler is combating some problems within his own fortress caused by a former partner and rebels.


I enjoy the mystery and adventure in the book, although some people might want a bit more action. Some of my students have complained that they can't understand some of the characters, especially the moles. The author writes the dialogue the way they speak, and it can be a challenge. My suggestion, don't worry about the moles' individual words; you can usually figure out what they're trying to say from the context. The plot skips back and forth between three settings, so that may confuse some readers also. One setting is in the evil fortress, and the other two settings follow the escapees after they are separated.
Posted by Mark Buxton at 1:28 PM 0 comments

Only You Can Save Mankind by Terry Pratchett 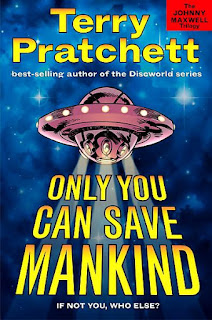 This book is interesting, but maybe bizarre for some readers, and I gave it a rating of four out of five. Johnny enjoys video games, and he's currently playing "Only You Can Save the Earth." While playing, a message appears on his screen that appears to be coming from the captain of the enemy spaceships. Johnny finds himself between reality and a dream world as he discovers that the aliens in the game are "really" being killed by his fighter. The aliens call him "The Chosen One" and beg him for protection from other players. The alien fleet can be saved if they can reach "The Border". Johnny must convince himself that he's not crazy and then must decide if he should help the aliens. After all, it's only a game, right?

I like the creativity of the conflict, although I would never recommend it for an award. Readers who enjoy alien novels should like this book, and it's a fairly quick-read. Some parts confused me a bit as Johnny tried to figure out if he was dreaming, playing a video game, or it was reality. If you don't like science fiction or aliens, move on to something else.
Posted by Mark Buxton at 8:09 AM 0 comments