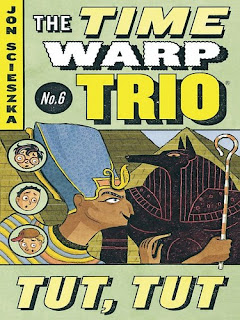 This book is the sixth in The Time Warp Trio series, and I gave it a rating of three out of five. Joe's sister accidentally opens The Book, and they are transported to ancient Egypt along with Joe's friends, Sam and Fred. The boys are accused of robbing a pharaohs tomb, but they discover the high priest is trying to steal some of the treasure. The boys are rescued by the Pharaoh's son, but they must still prove their innocence to his father. They've also lost The Book and Joe's sister, so they are unable to return to the present.

This book can be finished quickly by most readers. It has an interesting plot with a basic vocabulary, so it's an easy-read. Since it's a very short book, the plot is pretty simple and easy to follow. However, the climax ends up being one of my pet peeves. I hate when the conflict is resolved by the characters waking up, or in this case, when the characters return to the present. The resolution tries to explain what happened, but it's not the same as describing the action.
Posted by Mark Buxton at 3:41 AM 0 comments 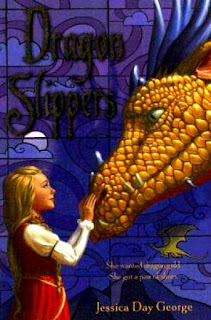 This book was recommended by one of my students, and I gave it a rating of five out of five. Creel comes from a poor family, so it is decided that she will be captured by a dragon, rescued by a handsome prince, and then live richly ever after. However, she strikes a deal with the dragon and receives a pair of blue shoes instead. She heads off to the King's Seat in hopes of using her sewing and embroidery skills to find a job. Another dragon named Shardas saves her from some thugs, and she becomes the dragon's friend. He hints that there is something very special about her blue shoes, but Creel doesn't realize their full power until they're stolen by an evil princess from a rival country. The power of the shoes may lead to the downfall of the kingdom, and Creel may be the only person who can stop it.

Creel was an interesting character as she transformed from a fair maiden into the heroine of the kingdom. She used her skills, her mind, her bravery, and the goodness of her heart to help achieve greatness. The plot offered many character conflicts, a number of action scenes, and a budding romance. The climax had a very unexpected twist, and the resolution left the door open for the sequel, Dragon Flight.
Posted by Mark Buxton at 2:45 PM 0 comments