Here Be Monsters by Alan Snow 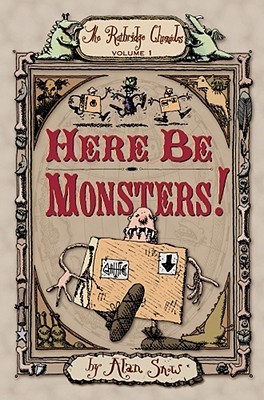 This book was recommended to me, and I gave it a rating of four out of five. Arthur travels above ground, searching for food, but he stumbles upon some strange activities. There appear to be men hunting for cheese even though it is against the law. His mechanical wings are stolen, and he finds miniature versions of real creatures. All of the entrances back to the underground are blocked off, and a new friend has his store demolished. There seems to be connection between missing creatures, a stolen invention, and the reason Arthur's grandfather is not able to travel above ground. However, no one can figure out what it is, but it's a real BIG problem.

I must admit that I wasn't really grabbed by the beginning of the book. There were men riding fake horses during their hunt for cheese, actual cheese! There were box trolls made from boxes, cabbage heads with actual cabbages for their heads, and other strange creatures. I like creativity, but I was not immediately enjoying the plot. However, once a problem arose and the plot became clearer, the book was more entertaining. The characters and events were still pretty strange, but I liked the plot. Mysterious tiny creatures, a missing invention, and a grandfather who was wrongfully accused of murder. Good stuff!
Posted by Mark Buxton at 10:36 AM 0 comments