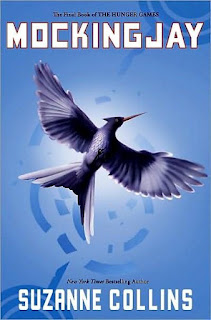 This book is the third and final book in The Hunger Games trilogy, and I gave it a rating of four out of five. Katniss escapes the Capitol at the end of book two with the help of the rebels in District 13. In this book, the rebels are pushing to overthrow the Capitol, and they need Katniss to be the symbol for the revolution. She is followed by a camera crew as she travels to different locations in Panem and sees firsthand the damage done by the Capitol. She is also upset to see Peeta on government broadcasts begging Katniss and the rebels to stop fighting. He's obviously been tortured, and his reunion with Katniss is memorable. Katniss spends the second half of the book training to join the forces set to invade the Capitol. The main thing she's asked the leader of District 13 is to let her kill President Snow.

You must read the first two books in the series to fully appreciate the plot of Mockingjay. It is an extension of the conflicts Katniss faced in the prior two books, and you won't understand her internal conflicts if you're not aware of her history. She continues her mental anguish as she tries to figure out if she loves her Hunger Games partner, Peeta, or her lifelong friend, Gale. It also seems as though the rebel leader is not much different from President Snow, so she has a hard time identifying the actual enemy. The action builds as Katniss sneaks through the Capitol, along with Peeta and Gale, in their quest to kill the president. The climax, falling action, and resolution offer surprises.
Posted by Mark Buxton at 3:41 AM 0 comments