Any Which Wall by Laurel Snyder 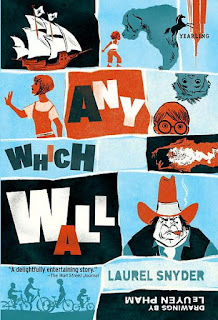 This book was recommended to me, and I gave it a rating of three out of five. It was interesting, but it just didn't grab me. Four children, ages six to twelve, live in the country and spend the summer hanging out together. However, they discover a wall in the middle of a cornfield that performs magic. They eventually realize that the wall's magic power is that it can transport them to other places that also have walls. The four children take turns making wishes that take them to other places in the world, past or future, which creates some adventures. A couple of the characters they meet along the way are Merlin and the son of Blackbeard the pirate.

Some readers may love this book, but there was something missing for me. Finding a magic wall in the middle of a cornfield was pretty random, and the early adventures weren't very intriguing. I must admit that I enjoyed the plot more as I read farther into the book. I found it more entertaining once they met Blackbeard's son and, later in the book, Bernice. Emma, the six-year old girl, was a curious character. She often gave the older children logical advice, like she belonged in the Mysterious Benedict Society. It was probably the author's intent, but I found it strange for the group to be using a first grader as their advisor.
Posted by Mark Buxton at 4:16 AM 0 comments

Mrs. Frisby and the Rats of NIMH by Robert C. O'Brien 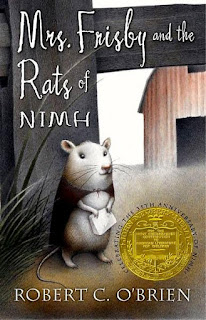 I reread this Newbery-winning novel for the blog, and I gave it a rating of five out of five. Mrs. Frisby's son, Timothy, is seriously ill and can't be moved for several weeks. However, the farmer is going to be plowing up the field in five days, so her home will be destroyed. She is advised to seek the help of the rats found under the rosebush, but she has little hope that they'll even listen to her. She discovers that these rats have amazing talents, and she also finds out many secrets about her deceased husband's life. The suspense rises as the rats race to move Mrs. Frisby's house before plowing day arrives without being eaten by the farmer's cat, Dragon. All the while, the rats must be on the lookout for the scientists from NIMH.

It's been a number of years since I read this book for the first time, and I still enjoy it. I think the thing I like most about the plot is that everything in the it is possible if the science experiments performed on the rats were as effective as described. It's not full of fantasy and magic like the movie version of the book. In addition to literature, I have a love for science and math, and the characters use those skills to solve their problems.
Posted by Mark Buxton at 4:15 AM 0 comments