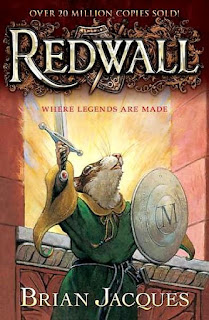 This book is the first in a very long series, and I gave it a rating of five out of five. Redwall is a fortress run by mice, and its purpose is to help needy creatures. They believe in peace and caring, although the legendary Martin the Warrior fought an enemy many years before. A beautiful tapestry on the castle wall honors his memory. However, Cluny the Scurge and his army of ruthless rats now plan to attack Redwall. Matthias views himself as the new protector of Redwall, and discoveries are made that link him to Martin. Matthias knows he must find Martin's sword in order to save Redwall. He helps to battle Cluny's army, has confrontations with attacking sparrows, a cat, an owl, and eventually a poisonous snake. Cluny is relentless in his attacks on Redwall, and Matthias is its final hope.

This series was very popular among students just a few years ago, so I'm happy to reintroduce it to current readers. All of the characters are animals, which I'm okay with. I also enjoy the idea of the weak defeating the powerful. I liked how the author introduced the main conflict, Cluny's attack on Redwall, very early in the plot but added more conflicts as Matthias tried to learn about Martin the Warrior to find his shield and sword. Cluny made repeated attempts to enter the fortress, so the plot didn't depend on one big battle. The sub-conflicts kept the plot fresh, while I knew there would eventually be a showdown between Matthias and Cluny. There's a great deal of action and suspense, so that should hold the interest of most readers. Many students have found it difficult to understand the moles, and some of the characters had trouble too. One of the characters comments that she can understand about every third word they say, and that was enough for me to get the gist of what they meant. It's a great book.
Posted by Mark Buxton at 3:58 AM 0 comments 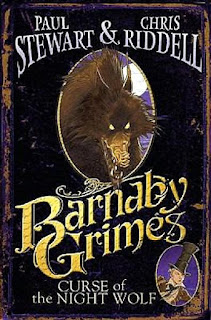 This book was recommended by our librarian, and I gave it a rating of four out of five. Barnaby Grimes is a messenger boy who likes to travel throughout the city by rooftop. This job gives him many opportunities to meet very interesting characters. One of his sickly friends finds a doctor with a miracle cure to his ailments, and Barnaby is suspicious that the medicine actually works. He becomes a messenger for the mysterious doctor and becomes even more suspicious of his activities. Although the doctor lives in the rich part of town, many of his patients are found in the most run-down parts of the city. Also, the doctor doesn't charge a fee for his treatments. Barnaby digs even deeper into the situation when many of the patients turn up missing or dead.

This book is the first in a series. The conflict in the story is unique, so it held my interest. I knew that the plot involved werewolves, but I wasn't totally sure how Barnaby and the doctor fit into it. That was a good thing, because it kept me wondering. The first page of the book grabbed my attention, because it described Barnaby's transformation into a werewolf. However, the introduction was a teaser, and I didn't find out what was really going on with him until much later in the book. Again, it held my interest by making me wonder about Barnaby would becoming a werewolf and how he would resolve the problem.
Posted by Mark Buxton at 12:58 PM 0 comments 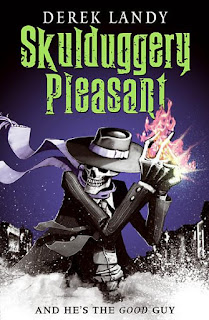 This book was recommended by a student, and I gave it a rating of five out of five. Stephanie's grandfather passes away, and he leaves her the majority of the fortune from his fantasy writing. However, she discovers that much of his writing is based on true events, and her biggest friend and partner turns out to be a skeleton named Skulduggery Pleasant. They discover that a character named Serpine has broken a truce and wants to find the mythical, powerful Scepter of the Ancients, but the Elders don't believe it. Stephanie and Skulduggery team up to battle all types of creatures and magicians/sorcerers in an attempt to stop Serpine. Serpine killed Skulduggery once to make him a skeleton, and he wouldn't mind killing him again with the power of the scepter. It turns out that Stephanie may possess some unknown powers of her own, but she's not able to summon them.

This book is the first in a series. I initially thought Skulduggery was a goofy character; I mean, he's a walking, talking skeleton. However, he has a quirky personality, and I enjoyed the dialogue between Stephanie and him. For example, Skulduggery informed her that his real head was stolen, and he won this one in a poker game. And later, when Stephanie asked if there was a way to tell if she had the ability to perform magic, Skulduggery said, "Yes, we cut off your head. If it grows back, you can do magic."

"You're being funny again, aren't you?"

"So glad you noticed."

It's corny dialogue, but I guess Skulduggery's dry sense of humor is similar to my own.
Posted by Mark Buxton at 12:17 PM 0 comments

A Wizard of Earthsea by Ursula Le Guin 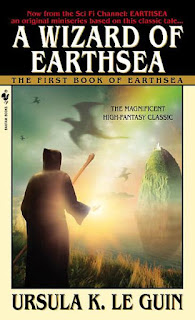 This is the first book in a series, and I gave it a rating of three out of five. A young boy, Ged, learns some spells from his mother, but he has dreams greatness. He leaves home with a wise, old wizard who will become his mentor. The boy is impatient and doesn't feel as though he is learning anything. He leaves the wizard to attend a school of magic and becomes one of the top students. However, on a dare, Ged performs a spell that releases an evil shadow that will hunt him down throughout the rest of the book. Most of the plot is spent fleeing, and then chasing, the shadow.

I had heard of this book for years, and the book jacket gave a very interesting summary of it. The actual writing did not live up to the hype. I found the plot rather boring as Ged did not perform much meaningful magic and there were few conflicts. He wandered from place to place, trying to become a great wizard, and then regretted his misuse of power. A potentially exciting scene, where Ged battles eight dragons, falls short. "Two dragons like the first rose up from the base of the highest tower. Even as the first one they came driving straight at Ged, and even so he caught both, hurled both down, and drowned them: and he had not yet lifted up his wizard's staff." Not much of a conflict; they're just gone. Even the climax lacked suspense.
Posted by Mark Buxton at 5:11 AM 0 comments