The Undertakers: Rise of the Corpses by Ty Drago 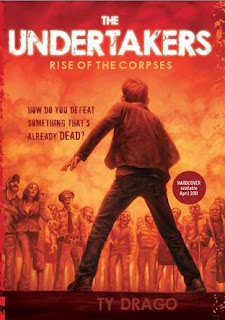 The book I read was an advanced copy, and I gave it a rating of five out of five. This book is also the first in a new series. Our world is full of Corpses, an army of dead bodies that have been taken over by some type of beings, but most humans cannot see them. The corpses can be slowed down with salt water, swords, and other weapons, but they can't be killed. However, a small group of Undertakers, young teenagers who can see the true forms of the Corpses, have created a force to stop them. Will learns that his dead father was the founder of the Undertakers, and he was the only adult known to have the ability to see corpses. Will trains with them and learns about the history of the war, but there's a sense that something is different about him. He seems to have natural instincts, and the Corpses have made his capture their number one priority. He has visions of a woman speaking to him, and leaving "gifts", but who is she? Will goes on a couple of missions without permission from Tom, leader of the Undertakers. The missions almost end in disasters as friends are killed, and Will falls into the hands of the enemy. Will's antics may cost all of the Undertakers their lives.

The corpses make an interesting conflict for the plot. They are not slow-moving zombies; they are swiftly-moving warriors. The fact that they can't be killed makes the problem even larger; how can the Undertakers stop them? The plot jumped right into the action as Will gains the ability to see the corpses, and an undercover Undertaker saves him from them. Will's training took a little longer than I would have liked, but there was still some action along the way. The author did a nice job of keeping the Corpses/Undertaker war as the main conflict, but there were several subplots mixed in too. For example, Will's missions constantly challenged the authority of the Undertaker's leader which could eventually lead to its downfall. Also, who was the mystery woman who spoke to Will while he was unconscious? How did his broken arm heal so quickly? Can the Undertakers stay organized if Will's disobedience to Tom's orders causes others followers to disobey?
Posted by Mark Buxton at 7:37 AM 0 comments

The Devil's Footsteps by E.E. Richardson 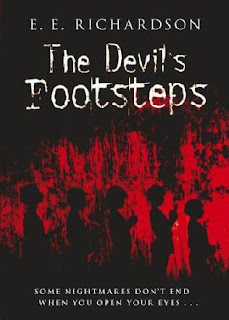 This book was recommended by several students, and I gave it a rating of four out of five. Bryan's brother disappeared five years earlier while they were in the woods. His brother stepped on some stones, The Devil's Footsteps, while saying a rhyme and was never seen again. Bryan figures out that the Dark Man has been taking children for many years, but he doesn't understand why the adults don't seem to notice or care. The Dark Man uses the fears of children against themselves, so how can they battle their own thoughts? Bryan joins up with Stephen, whose sister disappeared a year ago, and Jake, who recently moved to the town. Together, they must face their fears and figure out some way to stop the Dark Man from killing more children.

The beginning of the book seemed pretty simple and unimaginative, but I was wrong. What started out as a story like the bogeyman turned into a much larger tale of evil. The boys needed to uncover a secret hidden beneath the town, a terrible tragedy the town had forgotten. I thought the conflict was creative and offered a unique challenge, and the plot built up to a nice climax. The solution seemed pretty simple, but Bryan had a hard time overcoming his own fears and needed to make a very difficult decision in the end.
Posted by Mark Buxton at 8:01 AM 0 comments 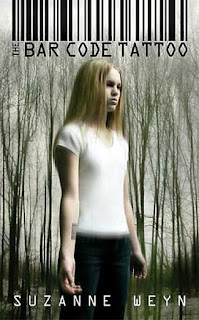 This book was recommended by a number of students over the past few years, and I gave it a rating of four out of five. Kayla is turning seventeen, and it's expected that she'll get the bar code tattoo on her wrist like most other people. However, she suspects there's more to the tattoos than just for identification purposes. Her father commits suicide and blames it on the tattoo. Her best friend's parents lose their jobs and money, apparently because of the tattoos. Kayla joins several other young people who support the Decode movement of a national senator, but there may be a spy among them. Kayla eventually finds herself wanted by the government and is forced to run for her life.

This book reminds me a great deal of the Uglies, Pretties, and Specials series written by Scott Westerfield. The government is out to control the citizens, and a group of young people decide to rebel. This book kept me wondering about the hidden secret behind the tattoos and included some action, especially once Kayla was on the run. It's also a book that makes readers think about society and government power. Citizens today wonder about personal privacy, and this book takes it to the extreme.
Posted by Mark Buxton at 4:26 AM 2 comments 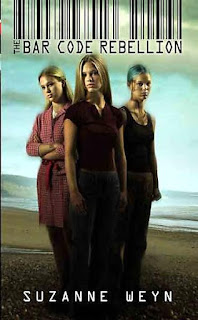 This is the sequel to The Bar Code Tattoo, and I gave it a rating of five out of five. The supporters of the Decode movement travel to Washington to force the president to repeal the bar code tattoo law, but the rally doesn't end well. Kayla escapes the ambush with the help of a truck driver from book one. The truck driver delivers bootleg tattoos around the country, and Kayla travels along with her. They see many signs and commercial ads with Kayla apparently saying the tattoos are great, and she's happy that she changed her mind about them. However, Kayla still doesn't have a tattoo on her wrist. There's a new secret about the tattoo that's even worse than the secret revealed in the first book, and Global 1 is determined to capture Kayla. Perhaps the fact that Kayla is meeting other people who look just like her is a clue. Global 1's master plan goes far beyond simple cloning. It's a secret that will change the world as we know it.

This book had a bit more action than The Bar Code Tattoo. The thing I enjoyed most was the way it made the reader look at society. It's all about government control and the ethical use of scientific discoveries. For example, if we could find a way to make everyone live forever, should we? I liked the addition of new characters mixed with the old ones. I also liked reading about this author's version of the future, although the new secret sounds like something someone in the world might actually believe but should never be used. Jack came up with a pretty cool way of traveling that's never been seen before, and Global 1 created some amazing ideas about the integration of nanotechnology, computers, and biology.
Posted by Mark Buxton at 3:43 AM 1 comments