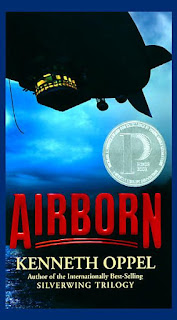 I gave this book a rating of four out of five. Matt Cruse works on a luxury airship that travels around the world. One year after rescuing a delirious man in a hot-air balloon, Matt meets the man's granddaughter, Kate, who is trying to find the strange flying creatures described in the man's journal. The airship is hijacked by pirates, and their damaged airship is forced to land on an unmapped island. Matt and Kate explore the island and discover a very unusual skeleton. It's large teeth indicate it was a dangerous animal, but can these creatures actually be alive. The plot takes off from there in a twisting adventure full of action, and more pirates!

It's an interesting conflict and plot, but I would have liked the action to move a bit quicker. The first half of the book held my interest, but I kept wanting more to happen. The plot picks up significantly once the pirates attack, and I enjoyed the surprises that followed. Kate's impulsiveness gets her into trouble but also allows leads to several interesting discoveries.
Posted by Mark Buxton at 10:34 AM 0 comments