Colonists have been living on a spaceship for years, and now they are considering returning to Earth. The chancellor sends one hundred convicted teens to the planet rather than sentencing them to death. The colonists will know it's safe to return if these teens are not killed by the radiation levels. Wells, the chancellor's son, gets himself convicted of a crime in order to travel to Earth with Clarke, a girl he loves. She doesn't return his feelings, since Wells was responsible for the execution of her parents. Meanwhile, Bellamy uses force to get on the shuttle, so he can protect his sister. During the commotion, Glass escapes the shuttle and sneaks back onto the spaceship. The teen convicts must survive the strange, new planet, and the spaceship colonists must face their own unexpected crisis.

The plot follows the stories of the main characters; different chapters focusing on each one. Clarke struggles with her mixed feelings for Wells, and she's the only convict with medical knowledge. Bellamy struggles with being accepted by the others, and his sister has a secret conflict. The book deals with overpopulation, since unauthorized babies on the spaceship are killed by the government. The ship also has different social levels that creates a conflict. Glass is from the highest class, but she's in love with a boy from a lower class. The book will give you a lot to think about. There is a sequel to it.
Posted by Mark Buxton at 12:28 PM 0 comments 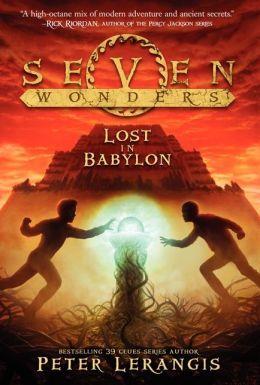 Marco disappeared in the first book along with the first loculus. Jack, Cass, and Aly find him in Iraq, and he leads them through an underwater portal to the ancient city of Babylon. They're searching for the second loculus but find citizens from the city stuck in a time warp. A girl named Daria says the king wants them to be his warriors, and she's secretly working for a rebel group. Jack and his friends sneak into a garden protected by soldiers, traps, and deadly creatures in order to steal the second loculus. Unfortunately, they discover the entire city of Babylon, and all of its people, will be destroyed if they take it away.

You must read the first book in the series to fully understand what's going on in this book. The characters continue to develop their powers, although Jack still doesn't understand his strength. This book continues the conflict with the Massa and adds a new twist. The kids are surprised to find out there's a traitor among them. Jack doesn't know who to believe. Will the loculi be used to save their lives, or will they be used for evil purposes?
Posted by Mark Buxton at 12:22 PM 0 comments 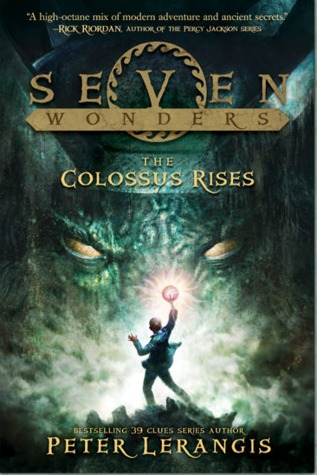 Before he knows it, Jack is kidnapped from a hospital and wakes up on a tropical island. He is met by three other kids who also have blond, upside-down V's on the backs of their heads. It is the sign of the royal family from the lost city of Atlantis and means they also have special powers. The kids have unique DNA that takes their best talents and makes them stronger. However, it will also kill them if the don't receive regular treatments. Jack's talent isn't clear, but he leads the group to Greece in search of a Loculus from Atlantis. The seven Loculi are the source of their powers and may save their lives. However, the Loculus is being guarded by a mythical beast, and a radical group is searching for it too.

This series is in the same style as the Percy Jackson books in that the kids are descendants of gods and are learning to use their new powers. Each book consists of a quest. This series is unique, because the kids will die if they don't return to the island for treatments. This book adds an interesting character named Torquin. He is over seven feet tall, weighs over three hundred pounds, and is supposed to protect the kids. However, the kids create problems for him, sometimes on purpose, so he  has a like/hate relationship with them. The plot includes codes, mazes, and adventures that keep it interesting.
Posted by Mark Buxton at 7:14 AM 0 comments

Seven Wonders #3: The Tomb of Shadows by Peter Lerangis 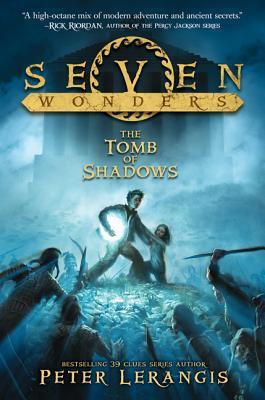 This book is the third episode in the series, and you should read the first books two books before reading this one. Jack, Cass, and Aly are searching for Loculi hidden in the seven ancient wonders of world. The kids have uncommon DNA that gives them special powers, but they will die at the age of fourteen because of it. Jack is reunited with his father, and he travels with the kids to Turkey, the location of the third loculus. They find themselves in the underworld, along with lost souls. The kids will need to face zombies, fearsome creatures, and their worst fears. They will lose their powers in the process, and one character will sacrifice his/her soul to capture the Loculis.

I read this book a year ago before reading the first two. It was kind of like listening to people talk in a private conversation, since I didn't understand references to past events. This plot introduces some important changes to the storyline of the series. Characters are added, a main character is lost, and the base on the hidden island is destroyed. I was surprised by these unexpected changes.

Seven Wonders #4: The Curse of the King by Peter Lerangis 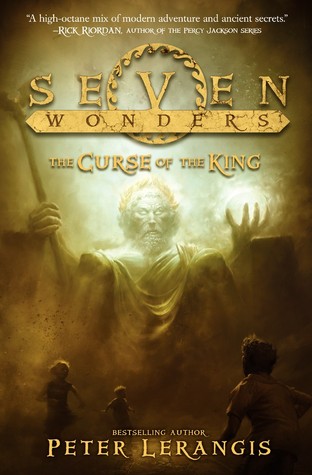 Jack, Cass, and Aly try to return to "normal" lives, but they need more frequent treatments to stay alive. Aly passes out and nearly dies, so they decide to continue searching for the other loculi. They travel to Greece and find the fourth loculus, giving the holder super strength, but a statue of Zeus comes to life and stops them. They also lose the other three loculi to the Massa, so they make a plan to get themselves captured by the group. The plan is complicated when their hulking bodyguard is killed, Jack's mom is working for the enemy, and a former friend is the Massa's strongest warrior. Then, the Massa leaders inform Jack that a prophecy has determined he will become the king of Atlantis once the lost continent is raised from the depths of the ocean!

You should read the books in order, or you won't fully understand what's going on. The author has some minor characters, and a main character, die in the series which is not very common. The Massa leaders play mind games with the kids to brainwash them, so readers must be alert for their lies. There's usually a clear difference between the good guys and bad guys, but Jack's mom informs him that it's a little grey in this case. The series is similar to Percy Jackson books, but the kids in this series don't really have super powers. Their genetics enhance their natural abilities with technology, memory, and strength. Jack's still hasn't identified how own special ability, but he is the group leader and seems to have a special connection to the loculi.
Posted by Mark Buxton at 12:19 PM 0 comments

The Thickety #2: The Whispering Trees by J.A. White 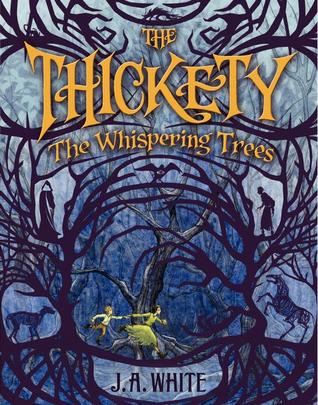 This book is the second in the series, and you should begin with book one. Kara and her brother, Taff, are stuck in the Thickety, a forest of strange, dangerous creatures and trees, and Kara knows she must try to defeat Sordyr, the evil, magical ruler of the forest. Kara has lost her grimoire and believes she can no longer cast spells. A witch named Mary Kettle tells Kara that she's a special kind of witch and can make magic without the book. Kara has a unique connection with animals and slowly learns that she is able to control their minds. Mary helps the children survive the forest and helps Kara learn to develop her powers. However, Mary was once a vicious witch who killed and ate young children. She says she's changed, but can Kara and her brother trust her? Is it possible for Kara to defeat Sordyr before being killed by her new "friend"?

The plot is pretty straightforward with Kara learning to master her powers before facing the powerful force controlling the land. Mary's character adds an additional conflict to the quest, because it's never clear if she might be leading the children into traps. Taff is willing to trust her with his life, but Kara is leery to put her faith in the witch. The author continues this issue all the way into the climax of the story, so there were some surprising twists. The addition of Safi as a character will undoubtedly become a problem as the series moves along.
Posted by Mark Buxton at 12:57 PM 0 comments

The Return of Skeleton Man by Joseph Bruchac 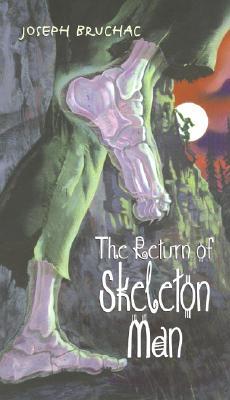 This book is the sequel to Skeleton Man, which I did not read. Molly and her parents travel to the state of New York for her father's conference at the Mohonk Mountain House. Molly is still having bad dreams about Skeleton Man who kidnapped her parents. It's suspected that he killed several others families, but Molly was able to stop him. He dropped into a river, but his body was never found. Now, Molly suspects Skeleton Man is spying on her, and her father has the same family. She goes to a Day of the Dead dance with her parents and feels like something is seriously wrong. When an explosion turns the room into total darkness, she knows she's right.

It might have helped to read the first book, but I don't think it's necessary. The main characters are descendants of the Mohawk Indians, and their folklore is included in the story. A Rabbit helped Molly survive in the first book, and a Mexican spirit helps her in this one. As I tried to understand the plot, I seemed to be between reality and the supernatural. The characters had feelings and dreams about Skeleton Man, but many of the events could have occurred in real life. People who've read the first book might know more about him.
Posted by Mark Buxton at 12:38 PM 0 comments

Locked In by Zana Fraillon 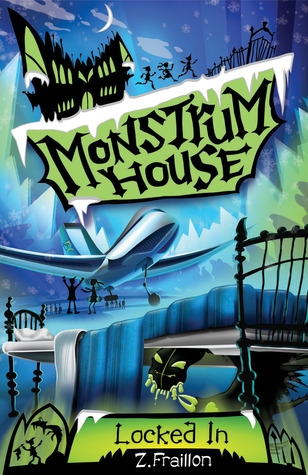 Jasper is great at creating pranks, but he goes too far when he fills the principal's car with reeking garbage. He's sent to Monstrom House School for Troubled Children, but it's worse than he expects. Upon arrival, he's put on a plane with some other kids, and they wake up in a totally different place. This version of the school specializes in training monster hunters. Yes, monsters under our beds and in our closets actually exist. Some monsters are simply annoying, but others are more terrifying. Jasper's not sure if he likes this school, and he's especially worried when a monster returns and starts turning students into statues.

My main problem with the book is that it's too short! The author creates a wonderful mixture of personalities, and the plot is interesting. Jasper is a good kid with a mischievous demeanor. Saffy's rich parents have sent her to numerous schools for troubled kids, but she's always managed to escape. The principal is a little kooky and rides around on a horse, and the school security is made up of muscle-bound apes from the other Monstrom House School. These kids aren't able to see monsters and have no idea what's going on at this school. This book is not written as a well-developed, lengthy novel, but it's a fun book to read. I'm looking forward to reading the next one when it's published.
Posted by Mark Buxton at 12:36 PM 0 comments