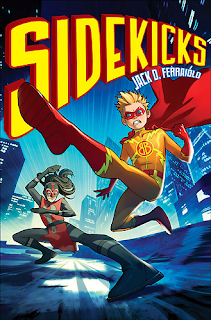 This book has a fun plot, and I gave it a rating of five out of five. Scott is a normal middle-school boy, except for the fact that he's also a superhero named Bright Boy. He's a sidekick to the main superhero named Phantom Justice, and they spend most of their time fighting their arch enemies, Dr. Chaos and Monkeywrench. When he's not worrying about his enemies stealing top secret inventions, Scott is trying to adjust to life at school. Bright Boy's tight-fitting outfit reveals some physical changes as he goes through puberty, and it becomes very embarrassing when pictures hit the television and Internet. These events add to the difficulty of hiding his secret life, and it's not until later in the book that Scott discovers the identify of his true enemy.

The idea of the plot sounds kind of goofy, but it was entertaining. There was a lot of action and a good deal of character development. A subplot develops into a Romeo and Juliet story, and the conflict twists in an unexpected way. The author added frequent humor through the dialogue as the foes exchanged standard, superhero comments, and Scott tried develop his first real relationship. As long as readers don't take it too seriously, I think most of them will enjoy the book. The author left the door open for a sequel too.
Posted by Mark Buxton at 9:15 PM 0 comments 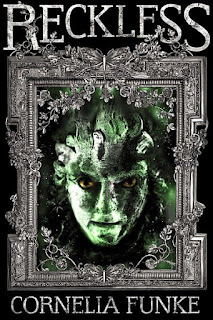 I gave this book a rating of four out of five. Jacob Reckless passes back through a mirror into a world of dwarfs, witches, and Goyl, creatures made of stone. However, this time his younger brother, Will, also passes through with his girlfriend. The Goyl king's wife, a powerful witch, puts a spell on Will that is slowing turning him to jade. Will, as the jade Goyl, will make the king immortal. Jacob must find a way to stop the spell before his brother completely changes and forgets about his past. In addition, the Goyl king plans to marry the daughter of the human empress to bring peace to that part of the land. Jacob discovers that the only way he can save his brother is to face the evil witch. No one has ever challenged her, and lived.

I found the exposition of the plot a little confusing. It may have been the strange names and creatures. The plot and conflict became clearer, and the author did a nice job of developing the suspense. The slow-working spell was like a time bomb, and many obstacles were created to stop the characters from saving Will. Some of the obstacles were in the form of fights while others were more magical. Fantasy lovers should enjoy the story.
Posted by Mark Buxton at 3:40 PM 0 comments

Jacob Wonderbar and the Cosmic Space Kapow by Nathan Bransford 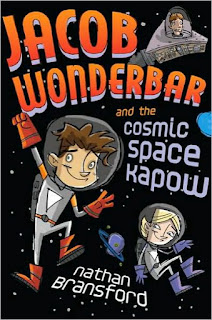 This is a goofy, entertaining book, and I gave it a rating of three out of five. Jacob Wonderbar is known for getting into trouble and for scaring away substitute teachers. Jacob, Dexter, and Sarah trade a corn dog for an alien's spaceship and zoom off into space. They accidentally destroy a few uninhabited planets (the cosmic space kapow) and are then kidnapped by a twelve-year-old space pirate. They are stranded on a planet that smells like arm pits, and Jacob later serves a jail sentence on a planet of substitute teachers. The kids' hopes to return to Earth are complicated, because radiation and debris from the cosmic space kapow are blocking the way. They may need to turn to Mick's father, the king of the universe, for help.

This novel is not classic literature with a wonderful plot or with an important message about life. It's slapstick comedy in a book. Jacob wants to see his father again, his parents divorced several years ago, and his friendships with Dexter and Sarah are very strong. That is as serious as this book gets. There is a planet with thirty-second days and nights, and another planet that worships mice. The spaceships are able to talk to their pilots, and they are able to be bored and jealous. The story is so strange that it's fun, so don't expect to take anything seriously. Just sit back and enjoy the ride.
Posted by Mark Buxton at 7:07 AM 0 comments 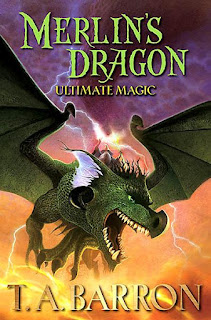 This book is the final book in the trilogy, and I gave it a rating of four out of five. You can see my postings for the first two books below. Ultimate Magic picks up right where the second book left off. Merlin has left Avalon to return to Earth, and Basil is losing hope that he can stop Rhita Gawr's evil by himself. Basil, along with the other creatures of Avalon, fight off an evil army, only to then face a force of Rhita Gawr's evil leeches. Merlin's son helps Basil discover the location of the source of the evil power in Avalon, and Basil realizes that their only hope is to destroy it. However, Rhita Gawr is making plans to leave the Otherworld, so he can conquer Avalon himself. He is soaking up power from unimaginable sources and may become too mighty to overcome. Basil can't defeat Rhita Gawr by himself and receives help from unexpected allies. Will the help arrive in time, and will it be enough?

This book was the best of the trilogy and held my interest throughout. It reunited many of the characters from all three books, and a couple of them sacrificed their lives to save Avalon. Basil also found himself near death before friends came to his rescue. There were a number of enemies to defeat during the plot, but I knew the climax would be a showdown against Rhita Gawr. The resolution had an ironic element to it and left me wondering about the future of Avalon.
Posted by Mark Buxton at 10:47 AM 0 comments 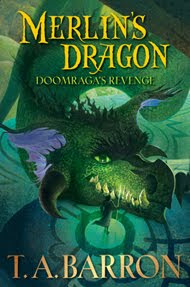 This book is the second in the trilogy, and I gave it a rating of four out of five. Basil has grown into the most powerful dragon Avalon has ever known. However, Rhita Gawr sends messengers of evil into the realms of Avalon in the form of leeches. The leeches influence the residents to spread chaos, panic, and hatred throughout the land and give Doomraga, Rhita Gawr's chief minion, more power. Basil and Merlin travel all over Avalon stopping the uprisings of evil, but it causes Merlin to lose his family. His son disowns him, because he was never around to be a father.; Merlin didn't show his son attention once he discovered his son had no magical powers. The evil has overtaken many of the residents and others have given up hope. The evil power is growing and Basil and Merlin may not be able to stop it.

You need to read the first book before this one; you can see my post for it below. I like the strength and power that Basil has gained in this book, but I miss his underdog character from book one. This books develops more character relationships with Basil as the other people start to notice him. Many young adults may be able to identify with Merlin's relationship to his son. Parents who are too busy to give attention to their kids and parents who have exceedingly high expectations for their kids are common issues in our society. This series is great for fantasy lovers.
Posted by Mark Buxton at 10:46 AM 0 comments 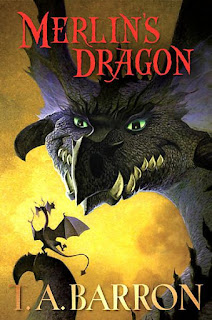 This book is the first in a trilogy, and I gave it a rating of four out of five. The setting of this story is in the magical land of Avalon, a land beyond Earth where Merlin has returned to be married. One day, a small creature hatches from an egg and is named Basil due to the fact that he smells like that herb. None of the other creatures can identify his species, and he wants to become someone who makes a difference in the world. Basil dreams that a large beast attacks and kills Merlin, and he becomes determined to warn Merlin of the danger. Basil goes on a quest to eat a piece of soil from all of the realms in Avalon, and there are hints that this will make him something special. However, an evil being invades Avalon, and its presence puts the entire land in peril. Basil must find Merlin and warn him that the being may be gaining strength, but how can this little creature help in saving Avalon?

The plot follows the life of Basil as he grows up in Avalon. He doesn't grow much, so he spends much of his early life trying to survive the predators. I liked how Basil struggled to accept himself, because he seemed so small and insignificant. Some other characters were curious about him and sensed that he was something special. The conflict grew once he left the realm of his birth and attended Merlin's wedding. The plot builds to a climax against a seemingly unbeatable enemy, and Basil does something totally unexpected to defeat it.
Posted by Mark Buxton at 6:44 AM 0 comments