Alfed Kropp: The Seal of Solomon by Rick Yancey 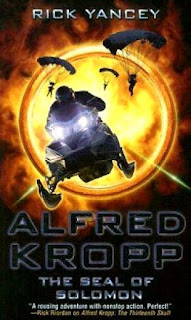 This book is the second in a series, and I gave it a rating of four out of five. Alfred is called on again when the Seal of Solomon is stolen. The seal can be used to release all kinds of demons that have been imprisoned for three thousand years. Alfred is kidnapped by a rogue agent but escapes and ends up going to Egypt to help stop the demons. Unfortunately, the rescue team is too late, and the demons are unleashed on the world. The rogue agent planned to rule the demons, but he lost the seal that controls them. The demons now rule themselves, and there's no weapon on Earth that can stop them.

I put the first book in the series with the adventure books, but this book fits more into the fantasy genre. Alfred is a likable character and reluctant hero. He's amazed at how he can mess up but still have good things happen. Action scenes are mixed in throughout the plot, so they can help hold the interest of readers.
Posted by Mark Buxton at 6:33 PM 0 comments