A Tale Dark and Grimm by Adam Gidwitz 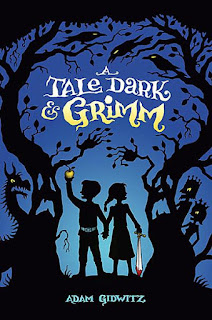 This book is a spin-off from Hansel and Gretel, and I gave it a rating of four out of five. Hansel and Gretel are twins born to a king and queen. Due to some curses and prophecies, the kids decide it's best if they run away. They meet up with the witch from the fairy tale, a warlock who eats children, and the Devil. At one point, Hansel is terrorizing a forest as a half boy, half beast and is killed by a duke. The children finally return to the kingdom of Grimm to be reunited with their parents, but the kingdom is being ravaged by a dragon. The children must find some way to unite the citizens against it, but they're only kids. Hansel and Gretel must also find some way to forgive their parents for the terrible thing done to them that caused them to run away.

I enjoyed the point of view used in the telling of the story; it had a Lemony Snicket ring to it. The narrator warned the reader that the plot would be scary, gross, and bloody, and it was. The narrator advised that young children should leave the room. The plot had many twists and turns as the children tried to find adults who weren't mean and cruel. Young adult readers will probably enjoy the book, because it takes a familiar story and makes it shockingly different. Many of the events were hokey (Hansel is killed a couple of different times), but that's also what made it amusing.
Posted by Mark Buxton at 9:28 PM 0 comments

In a Glass Grimmly by Adam Gidwitz

This book is a sequel to A Tale Dark & Grimm, and I gave it a rating of five out of five. Jack and Jill have problems at their homes and decide to go on a quest with a three-legged frog. They must find the Seeing Glass, a powerful mirror for which kings would give up their kingdoms to possess. The children survive the challenges of the giants at the top of the beanstalk, the evil mermaids in the sea, dangerous goblins under the ground, and a fire-breathing salamander. Jack and Jill are brave adventurers, but their brains are their most valuable weapons. However, the children risk their lives against many foes but still may never discover the power of the Seeing Glass. The key is finding the end of their con-fusion.

I enjoy unexpected and strange humor, so this book was right up my alley. I liked how the kids solved their challenges through cleverness, and the adventures had unusual twists. The book began with a couple of familiar fairy tales, but the narrator tells the reader the "true" endings to the stories. The description is a little gross and crude at times, but it's something most teen readers will enjoy. You can find my review of A Tale Dark & Grimm by typing the title in the search box at the top-left corner of the screen.
Posted by Mark Buxton at 2:48 PM 0 comments

The Grimm Conclusion by Adam Gidwitz This book is the third in the series, and I gave it a rating of four out of five. Jorinda and Joringel are twins who were "born" under a juniper tree. Joringel gets his head chopped off by his evil stepfather, and Jorinda becomes engaged to the prince. Her story is similar to the story of Cinderella, but it has major changes. She must face monsters, encounters unicorns, and the king hates her. Meanwhile, Joringel heads out on his own and finds new adventures. You're probably wondering how this is possible after Joringel lost his head. I'm not going to tell you. The children's stories go their separate ways, but they are destined to live happily ever after, maybe.

The entire series presents new versions of old fairy tales. The author has no problem describing new events in gross ways, so I'm giving you fair warning. Joringel has his body chopped up and added to a stew, so you'll enjoy the author's creativity if this doesn't bother you. The story is written as if the narrator is having a conversation with readers, and the narrator/author actually becomes a character later in the book. I found some parts of the plot were grosser than needed, but I appreciated the author's imagination and enjoyed the book overall.
Posted by Mark Buxton at 7:25 AM 0 comments This book is the second in the series. Dirk Lloyd is actually the Dark Lord of the Darklands, but he's been trapped in the body of a human boy by Lord Hasdruban. Christopher and Sooz are his friends, but Sooz mistakenly gets sent to the Darklands. It's not easy to travel between worlds, so she's on her own. She is wearing the Dark Lord's ring, so his followers think she's going to be their queen. This keeps her alive for awhile, but the Dark Lord's enemies are preparing to attack. Meanwhile, Dirk, the Dark Lord, is stuck back on Earth trying to figure out how to help Sooz. Lord Hasdruban sends an assassin to kill Dirk which complicates things a little. Dirk doesn't have the power to travel back to the Dark Lands, and Sooz doesn't know what she's doing. Can they both survive?

I didn't read the first book in the series, but I was able to easily understand what was going on. You'll figure out pretty quickly that Dirk isn't as evil as people think he is, and his enemies in the Dark Lands aren't all that good. It's funny listening to him help people while he's trying to be evil. Sooz rules the Dark Lands differently than Dirk which makes things interesting. His evil followers aren't sure how to react to Sooz's kind ways, and it's even more confusing when Dirk returns. The first book in the series is called Dark Lord: The Early Years.
Posted by Mark Buxton at 9:09 AM 0 comments

The Inquisitor's Apprentice by Chris Moriarity I found this book at my local library and gave it a rating of four out of five. Sacha becomes an apprentice to the legendary detective, Maximillian Wolf. They are joined by another apprentice, Lily, and their job is to stop the illegal use of magic. Lily comes from a wealthy family, so Sacha decides he must hide his poor background from Wolf and her. In their first case, someone is trying to kill Thomas Edison. Edison has invented a machine that can identify magicians, and the clues about the assassin's identity may lead the inquisitors to Sacha's family. In addition, someone is secretly following Sacha, hiding in the shadows, but there is something strangely familiar about the person. Sacha doesn't realize that his own life is in danger too.

The book reads like a mystery, and it offers several suspects to consider. I liked how the plot provided clues to keep me guessing, although my first thought turned out to be correct. The book mixes true information about New York with the fantasy of the plot. I never really understood what made some magic illegal; a baker paid a fine for using magic in a recipe. One of the characters mentioned that it's more about who is doing magic, not the actual magic being done. Officer Wolf is one of those characters who seems to hold a secret, and his innocent behavior is masking more power than others suspect. This book is the first in a series; the second book is called The Watcher in the Shadows.
Posted by Mark Buxton at 9:03 AM 0 comments

The Apothecary by Maile Meloy This book is the first in a series, and I gave it a rating of four out of five. Janie's family is forced to leave the United States, so they move to London. She meets a boy, Benjamin, whose father is an apothecary. The apothecary's ancestors have been guarding a powerful book for centuries. The book began as a record of natural healing medicines, but it grew into a record of potions with magical powers. The Russians want the book now, since the apothecary may have discovered a way to stop the effects of atomic bombs. Benjamin's father disappears, a gardener is murdered, and the kids don't know who can be trusted. The British police, Russian government, and spies with German accents are all after them. The apothecary's book will lead them on adventures that they never could have imagined.

The plot moved along nicely, and the potions provided interesting twists. Characters became birds, temporarily invisible, and were forced to tell the truth. The action picked up when the apothecary told the children about the book, and Benjamin's father disappeared. Pip was a nice addition to the characters later in the story. He was a small, charming pickpocket, and he added some humor to the book. Overall, the plot was not overly magical, and the author kept a nice balance between fantasy and the believable.
Posted by Mark Buxton at 7:38 AM 0 comments This book is the second in the trilogy, and I gave it a rating of four out of five. You should read the first book, Jinx, before reading this one. Jinx is a magician's apprentice, and the fate of Urwald rests with him. He is the Listener, he can talk to the trees, but he does not fully understand his own importance. The trees fear his companion, Revel, and Jinx is trying to take him out of Urwald. His best friend, Elfwyn, seems to like Revel, but Jinx fears she's being used as Revel tries to become king of Keyland. Meanwhile, Simon, Jinx's master, thinks the Bonemaster has escaped from prison. Jinx wants to help Simon, but Simon wants Jinx to learn more about magic. He sends Jinx to Samara, a world where magic is illegal, but Jinx finds a helpful friend is missing. Time is running out. Will Jinx learn the secrets of the Listener in time to stop the Bonemaster and save Urwald.

Again, read Jinx first. Jinx knows he's an important character, but he doesn't always have the knowledge to do what he wants. He's compassionate, brave, and impulsive. The author provides clues to help make predictions but then throws in unexpected twists. It seems clear that Jinx will need to unite the creatures of Urwald, but it's unclear how he'll do it and defeat the Bonemaster, stop Keyland from invading Urwald, and "save" Samara. I'm looking forward to reading the final book in the trilogy.
Posted by Mark Buxton at 12:14 PM 0 comments